The cool spring and early summer and adequate rain have been a benefit to native grassland habitats in our area.  Often these prairie plantings seem to be at peak bloom in early August, but at least at Two Rivers they are flowering abundantly right now. 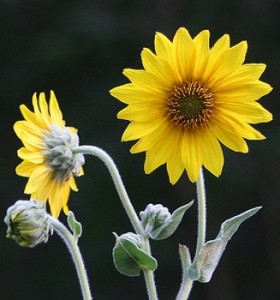 At Woodland Dunes there are a couple of native grassland plantings.  The first is the Steffen Prairie, a couple of acres of open land near Todd’s Pond on Willow Trail near our headquarters.  Originally planted by naturalists Jim Steffen and Bernie Brouchoud in the 1980’s and expanded about 10 years ago, this area is a maturing planting with a modest diversity of prairie plants.  Although at first glance native grasslands would appear to be little more than grassy fields (and indeed grasses are an important plant component), prairies are also populated by many species of forbs or flowering plants which add so much to the beauty and function of these ecosystems.

Around Todd’s pond, the important grasses are big and little bluestem, indiangrass, and switchgrass, along with some non-native grasses such as bluegrass, smooth brome, and reed-canary grass (an invasive which we try to control).  Many of these grasses are bunch-forming and grow in uneven clumps, giving the prairie a somewhat bumpy appearance.  Intermixed are a number of forbs- dotted mint and spiderwort in the early summer, coneflowers, sunflowers, blazing stars, bergamot, and goldenrods in the late summer and fall.  The grasses provide food for a number of species of mammals and even butterfly caterpillars, while the forbs feed many species of pollinating insects- butterflies, moths, bees and wasps, and beetles, upon which plants depend for their reproduction.  Large colonies of field ants also dot the prairie, insect civilizations that can persist for decades.  Birds such as goldfinches and kingbirds also visit these small prairie patches, along with many mammals including white-footed and meadow jumping mice, voles, moles, ground squirrels, woodchucks, and foxes.  Ducks, kingfishers, and sandpipers visit the pond and some nest in the nearby meadow.  Even a small habitat patch can provided homes for many species and give rise to a vibrant ecosystem.

Along Woodland Drive and Goodwin Road is a much larger grassland established in the last 10 years or so.  Totaling 94 acres, it is a significant prairie for our area, and was established with the help of multiple partners including the Natural Resource Conservation Service, US Fish and Wildlife Service, Pheasants Forever, and Woodland Dunes.  This prairie has many of the species found near Todd’s Pond, and one will notice cup-plants, compass plants, purple coneflower in addition.  Large prairie spaces are required for many grassland birds such as harriers, grasshopper and savannah sparrows, Henslow’s sparrow, sandhill cranes, bobolinks, and eastern meadowlarks.  And larger mammals such as coyotes.  Restoration of wetlands on such sites helps many species of waterfowl and sandpipers.  Access to this grassland is available by Coneflower Trail off Goodwin Road just east of Woodland Drive.  Part of this prairie was burned in spring, which helps control shrubs, makes nutrients more available to plants, and removes built-up thatch that inhibits young plants growth.  As a result, the burned area is looking especially good right now.

As you walk the trails though these grasslands you feel the breeze, see the many blooms, and hear an abundance of insects from the buzzing of bees (which are seldom aggressive) on the flowers to the multitude of crickets and grasshoppers hidden in the leaves.  You will feel an appreciation for the abundance of life in these places and know that with just a little help from people, both we and wildlife can thrive.