If one takes some time outdoors to observe and think, often one realizes that we are surrounded by so many fascinating creatures and behaviors.  Little miracles of nature that if appreciated for what they are make our lives better as our understanding of the real world deepens.  Ok, that’s pretty heavy on philosophy, but that’s what often happens when one thinks about all of the massive changes to ecosystems that happen during migrations.  And- birds are pretty interesting to begin with, so fall, when there are so many more of them, becomes a wondrous time of year. 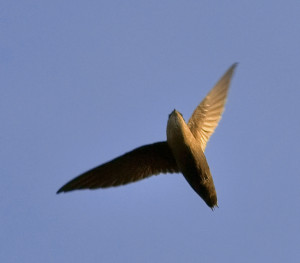 One such occurrence has been taking place at my home, an old farmhouse with a large, now unused brick chimney, that has been a nesting place for chimney swifts since our family has lived there (and probably long before that).  Chimney swifts are hardly noticeable birds that spend most of their lives on the wing feeding on insects (and I think flying just for the joy of it).  Before people, they nested in hollow trees in forests, but when we removed trees they found that brick chimneys worked just fine (although I wonder about the fumes).  Upon their return from the tropics in spring, a pair, or trio (there often seems to be an extra adult) select a chimney which provides them a nesting place safe from many predators and has a rough surface upon which they can grasp and hang.  They build a nest of sticks glued together with their saliva and pasted to the sidewall of the structure, and in midsummer can be heard feeding their young.  The nest reminds me of a the hammocks that mountain climbers use as overnight shelters on sheer rock faces.  The adults fly many miles to catch enough insects to sustain themselves and their growing young, chattering as they travel over our yards at higher altitudes than swallows often do.  In late summer the young fledge and join the adults, and often groups of 5-7 birds are then seen pursuing their prey. 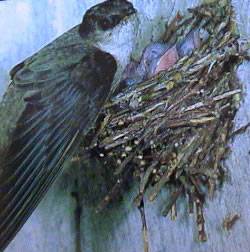 Chimney swifts don’t seem to like being alone, and in early fall (mid-August) begin forming larger flocks in preparation for their southward migration.  While during nesting a chimney is occupied by a single family, in fall they gather in communal roosts of many birds.  It was this behavior that I observed recently at our house.  About a week ago, while mowing the lawn in the evening, I suddenly noticed dozens of swifts circling the yard, far more than had been there in summer.  I decided to tell the rest of the family, but had just a few more minutes of mowing to do.  When I shut off the mower, I realized that all the birds were gone.

The next evening, perched on lawn chairs, we watched.  Sure enough at sunset the sky above the yard was again filled with dozens of swifts, and after wheeling over the house for a while they began to fold back their wings and drop into the chimney one by one like leaves falling.  They had already begun entering the chimney when we began counting, but we still counted 37 while we watched.  A few nights later we counted 44.

We’ve replaced our furnace this year, and the new one doesn’t require a chimney.  We could cap off our masonry chimney, but really don’t want to displace our swift tenants.  Like all wild birds, they have a hard life, especially for those which travel so far during the year.  There are fewer nesting places than their used to be as chimneys become a thing of the past, pesticides poison their insect food, and tall structures present a collision hazard.  People are now counting swifts to determine what is happening to their population, and people are erecting artificial structures in which they can nest.

Are chimney swifts “good” for anything?  Well, anything that adds to the diversity and thus stability of nature is important, to paraphrase Aldo Leopold.  In a selfish sense, a bird that eats 12,000 flying insects each day is certainly important and probably good for us.  Those 44 swifts that slept in my chimney probably polish off a half million mosquitoes and other bugs each day, or about 193 million in a year.  That’s a bit of a miracle in itself.