Early fall is a special time in terms of wildlife and habitat. Animals are moving or preparing for winter, and plants are either storing energy and nutrients or producing fruit and seed before they die.  This summer has been a good one for many species of plants, with timely rains and plenty of warmth, but not too much.  As a result it has been a good one for many animals as well.

As land managers our goals include maintaining as much diversity of species in our ecosystem as we can.  A diversity of plant species gives rise to a wide assortment of food sources and habitat structure to feed and shelter wildlife both resident and migratory.  Around Two Rivers and Manitowoc we are blessed with an array of interesting habitat types, some of which are diverse and welcoming to wildlife.  Others are degraded and dominated by few species, only the toughest, and often those that are invasive hitchhikers. 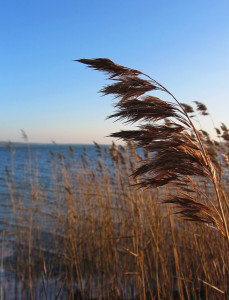 August and September are good months to work on control of Phragmites australis, the enormous common reed grass that has invaded many wetlands and roadside ditches.  It is dormant in winter, and in spring and summer, herbicides don’t have much effect.  In fall, however, the grass will absorb herbicide more effectively, and control will be better.  Constant mowing also controls this plant, but often Phragmites lives in wetlands where mowing is not possible.  So, for a narrow window of time in August and September, common reed can be controlled, and our staff takes to the marsh and adjoining land along the West Twin to try to preserve the cattails, sedges, and native grasses and other plants.  In that past few years, we’ve extended this activity to land owned by others nearby who wish help in controlling Phragmites, which if unmanaged will dominate and degrade wetlands as far as wildlife is concerned.  Animals here don’t eat it, and few birds nest in it, so it can run wild as it already has along Green Bay. 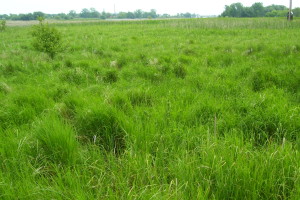 So our staff takes to the water to work, and in the process we are re-introduced to some wonderful places along the Twin rivers.  The habitat along these rivers, which have been so heavily impacted by people, is still remarkable.  There are large sedge meadows with many high-quality plants such as many sedges species, blue-joint grass, bidens (a yellow, daisylike flower), wild irises, jewelweed, and many other plants.  Sora rails, sedge wrens, swamp sparrows, and redwings settle among the plant stems, and overhead bald eagles, ospreys, ducks, geese, gulls, and cormorants fly. Behind the marshes and sedge meadows, on drier ground, are alder thickets and shrub swamps, then forests of tamarack, elm, ash, willow, and others. But along the shore and around the edges the invasives threaten these habitat gems, and they need help from we who brought the invasives here in the first place.  Just waiting for nature to sort things out on her own will take a long time and will probably result in the loss of some species and changes overall which we will not like nor will they be good for us.

We feel it is an obligation to at least try to keep as many species as possible in our area and along the Twin Rivers.  Our rivers are important as wildlife corridors and nurseries, and invasive species are a major threat.  There are two major efforts aimed at Phramites control in our area- one by Woodland Dunes on the lower East and West Twin Rivers, and the other in eastern Manitowoc County by the Lakeshore Natural Resource Partnership and Manitowoc Co. Lakes Association, both funded by grants from the Wisconsin Dept. of Natural Resources.  Any landowners with property on the lower Twins affected by Phragmites  who wish assistance can contact Woodland Dunes for help with treatment.  This invasive species presents difficult problems, and it will take effort and cooperation of many people to manage them and save our wetland gems.