While working on rebuilding a fence, my fellow interns and I took a water break and went on a walk down cattail trail. We saw the usual birds, red-winged blackbirds singing their “vote for me” calls and dabbling ducks flying overhead. Near the end of the trail you could hear the horse-like trill of a sora and see the rustling of plants from a marsh wren. From the kayak launch, we could see a bird that none of us recognized. It had black feathers with bright white bill. The bird seemed like it could be a duck, but also reminded us of a hen. After further research we learned that this chicken-like bird is an American coot. 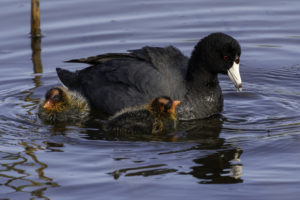 The American coot is chicken-like with a dark grey to black coloring. The bird has a rounded head and a sloping white bill, with yellow-green legs. At closer range a small patch of red can be seen on the forehead. These birds can live in various aquatic habitats such as ponds, marshes, and along the edges of lakes. During the breeding season they are usually found in shallower water with marsh vegetation. Coots are tough, adaptable birds, and swim out in the open like ducks despite being related to the secretive rails. Even though they swim like ducks, they have lobes instead of webbed feet. On land they walk like a chicken, which gives them the nickname “marsh hen” or “mud hen” because of the way their heads bob.

These mud hens are very territorial, using their strong legs and lobed toes to rear up and attack each other. They may attack a coot that has wandered into their territory by taking a running start and flapping their wings to furiously chase them off. This term, called splattering, is also used to help them take flight and become airborne. Coots usually hang out in flocks where they can be noisy and aggressive, making a variety of calls throughout the day. A group of these birds are called many different names such as commotion, fleet, and swarm of coots. Their diet consists of plant material that include: stems, leaves, pondweeds, and others. They also eat tadpoles, insects, and even eggs of other birds. Coots are kleptoparasitic, which means that they will steal a meal from other birds if they don’t feel like hunting for their own food.

As global temperature increases, the American coot’s range may be affected. Audubon’s scientists have used bird observations and climate models to predict the possible effect from the increase. If there is a 1.5 degree celsius increase, 14% of the bird’s range will be lost and spring heat waves may endanger young birds in the nest. If the temperature increases another 1.5 degrees, 19% will be lost since wildfires could destroy the coots habitat, and even prevent it from recovering if the fire burns repeatedly. Climate change can affect the birds’ range of migration as well. In Ohio, studies have shown that coots move to their breeding range a half month earlier than they did 100 years ago. An increased amount of coots are staying year round in their northern range as well. The long-term impacts are unknown, but it is up to us to help curb climate change and protect these chicken-like water birds.