↓
Home Menu ↓
Skip to primary content
Skip to secondary content
One time-honored tradition at Woodland Dunes is the summer bird survey.  We don’t refer to it as a nesting survey because we don’t actually document nesting as was done for the Wisconsin Bird Atlas- rather it is a series of counts done each summer during the nesting season to document what species and to some extent how many birds are present in the Woodland Dunes Preserves.  They were begun about 50 years ago by Bernie Brouchoud, who went on to found the Woodland Dunes organization, and who tirelessly counted and banded the birds found here.
Bernie’s early summer counts were traveling counts. He had more than a dozen routes that he walked in and around what was 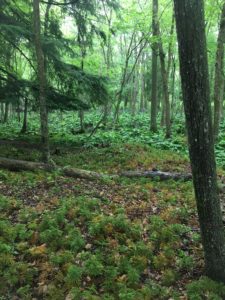 later to become the main preserve, counting every bird heard or seen.  The routes took him (later us) cross country- sometimes through challenging mucky swales, sometimes along roadways.  Some of the routes took us far off trail into the heart of the State Natural Area through swamps covered with countless red maple and green ash forest, with white pines and hemlocks on the drier ridges.  The deep forest at 5 am was a misty, magical place where orchids were encountered along with unusual birds (for eastern Wisconsin) like Acadian flycatchers, brown creepers, white-throated sparrows, hermit thrushes, broad-winged and red-shouldered hawks, and other unexpected residents.  Old fences and ancient farm machinery deep in the woods reminded us of a busy past where the forest and adjacent fields were utilized more for people than birds, making us wonder how many grazing cows became stuck in the mucky soil, and what it must have taken to free them.  Mosquitoes were abundant, and our hip boots protected us not only from the swale’s waters but hundreds of little biters.
A problem with the traveling counts in the forest was they were hard to duplicate.  At the time GPS was only moderately accurate, and only Bernie knew where his wandering routes took him in the forest, and even he varied from year to year.  We then adopted a series of about 30 point counts, with points located at places that were easy to find from year to year.  So, going forward, we can compare birds encountered at specific places over the years.  We can still compare overall species numbers over that time, and fortunately they haven’t changed too much.  Bernie used to record about 110 species in the summer at Woodland Dunes, and this year’s counts yielded 102.  We think that’s a remarkable diversity of bird species in one location during a non-migratory period and speaks to the diversity of habitats found here.  Some birds formerly encountered are sadly missed, like upland sandpipers, yellow-headed blackbirds, and black terns.  Some are still present but not as common, like white-throated sparrows, scarlet tanagers,  grasshopper sparrows, and black-throated green warblers.  Still others seem to holding their own, like redstarts, yellow warblers, and eastern meadowlarks in the grassland areas.  And some, like dickcissels and Henslow’s sparrows are variable and hard to predict.
The summer bird surveys at Woodland Dunes, even though they are time-consuming, require us to interact with nature in an intense and personal way.  They give us an opportunity each year to assess what’s going on in the preserve at the height of the growing season.  They force me to be aware of all of the living beings, plant and animal, that surround me as I survey their world.  And as I travel through it I am forced to face the fact that even though I am present, I am separated from it through my use of my car to access it, my repellent to keep unwanted insects away, my phone to record checklists rather than my memory- so many things.  My entanglement with nature is incomplete, but I hope that I can experience and document enough and carry enough of the experience with me, that I can help these birds and the environs they depend on working as they should a bit longer than they otherwise would.  As another wonderful change of season unfolds and wildlife is rearranged, I hope that you can experience a sense of belonging in the world of the birds and continue to find ways to help them as well.
photo- deep in the forest at Woodland Dunes by Jim Knickelbine