I felt brave yesterday. I took a hike in the forest, where the mosquitos are mean, and the numbers are plenty, but I’m so glad I did. For my courage, I was rewarded with an exquisite multi-colored bouquet of fungus forms. 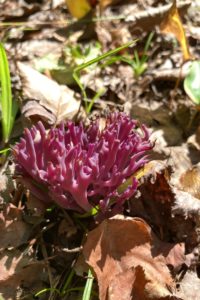 Different nature goals were in mind when I first set out, but with these beauties popping up everywhere, I surrendered to their look-at-me demands. Had I been thinking about this prior to my hike, I would have expected the elaborate fungus show considering how much rain, sun, and heat we’ve had lately.

In the spring, my eyes scan for the migrating songbirds carrying their fresh, bright courtship colors. Yesterday, in the depths of the woods, I found them again in the form of fungus. Bright reds reminded me of the Scarlet tanager. Lemon yellows paired with the bright Yellow warbler. Oranges matched that of the Baltimore oriole, and incredible purples reminded me of the iridescent purple sheen on a Common grackle.

The show stopper was the clavaria zollingeri or the violet coral. This purple coral-looking stunner is found in both broad-leaved and coniferous forests with a wide territorial range; however, it’s considered a rare find. (Exciting!) There was also another bright purple mushroom nesting in sedge grasses that was just too beautiful to disturb. I believe it was a cortinarius violaceus (don’t you just love how Latin names roll off your tongue?), or violet webcap. I left it untouched, but had I checked below the cap for gills, it would have confirmed or denied my identification.

With all of these colors, mixed with a few tans and browns, I wanted to shut off the sun and just let them be the landscape 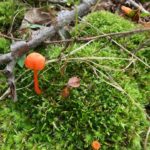 To that end, there are a variety of mushrooms that actually do become the star when the lights are out. Certain forms of fungi become bioluminescent when the sun goes down. Researchers believe that they have this magical glow for a couple of different reasons. One may be to attract insects such as beetles, wasps, flies and ants to the cap, helping to spread the fungal spores. The Armillaria mellea, one of the most prevalent bioluminescent mushrooms, glows in the mycelium portion, the bottom part of the mushroom that isn’t usually visible. The reason? It may be to discourage animals from eating it. 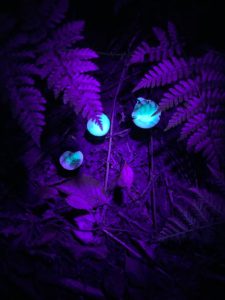 You can witness this glowing phenomenon by going into your backyard with a black flashlight after dark. If you have certain forms of mushrooms in your yard, shine the black light on them. Not all will glow, but you may get bright pinks, greens and yellows that you would not notice in the daytime. I did this with a co-worker last year and we were awestruck. How magnificent to witness this nocturnal communication.

We’d like to remind you that if you hike trails at Woodland Dunes or any other nature preserve, please leave all fungus and other forageable treats of nature right where they are. Let the fungi- feast be for your eyes only, maybe snap some photos, but please get out there and enjoy the fungal cornucopia that’s going on right now.