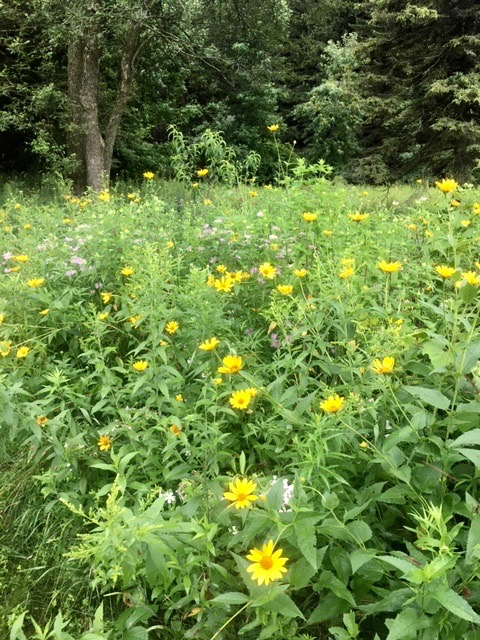 Late summer is a season of abundance. Birds, butterflies, wildflowers, mosquitoes- so many things seem to be at their peak now. For gardeners of either the cultivated or wild variety, the proof of their efforts is on display, and I think its been a very good growing year.

I am a very lazy gardener, and I think way too much. In my shabby looking garden beds, which do not compare well with those in the butterfly garden at the nature center, I tend to evaluate the merits of the various plants that have volunteered to grow without my intention. Is it being used by bees or butterflies? Will it provide berries or cover that helps birds? I prefer native plants, but a few non-natives, if they don’t take over, add variety to the mix.  And so through this ridiculous self-dialogue I end up with less order and more variety than I would like.

One way to skirt the issue is to use plants which are attractive, native, and very vigorous on their own. Sometimes they behave as bullies and take over an area, but because they are natives and likely to benefit insects and other animals, I don’t feel quite so bad about letting them have their way.

I have areas around my house in the country which are old fields. They are populated by whatever plant or seed was around to take advantage of some bare ground. These are often non-native, well established, and have an enormous store of ungerminated seeds in the soil around. Planting directly into such a place is usually a waste of time and seed.  But sometimes, with a little mowing, smothering with plastic, or careful use of herbicide (not to excess), these tough customers can be persuaded to give up some space. If especially tough native plants can be introduced there, they stand a chance of becoming part of the species mix and will improve the value of land to wildlife greatly.  It doesn’t always work- sometimes their are just so many tough weeds and their seeds are just too much competition.  But sometimes, even with a little preparation, one can change the biological landscape in a really positive way.

What plants to use? I’m just going to highlight two that worked well in my old field- wild bergamot and false or oxeye sunflower. Bergamot is one of the many members of the mint family, has aromatic leaves (used in Earl Grey tea), and a kind of messy lavender flower, or cluster of flowers. The individual flowers are tubular, and must contain a wonderful-tasting nectar because bumble bees with their long tongues and hummingbirds seem to be drawn to them in numbers. Bergamot is an aggressive perennial, and once established on a wide variety of soils seems to persist and spread well, muscling its way into a community of non-natives.

False or oxeye sunflower is another easily grown wildflower. It prefers dry, sandy soil but I have had good luck growing it even on more loamy sites as long as they aren’t too wet. It is about the same height as bergamot, 3 feet or a bit more, and it also attracts hummingbirds and some pollinating insects. It’s probably not as valuable as bergamot, but it is a good addition and is easy to grow. It is a short-lived perennial that seeds itself into new areas. Also, it’s yellow color just looks nice alongside the lavender of bergamot.

These two plants really grow well in some challenging spots I’ve worked on and there are many sources for seeds and plants.  Right now around my yard they’re full of bumblebees and butterflies, which is what I was hoping for.  And its the same at the wildflower plantings at Woodland Dunes.  As time goes on one can add more species for diversity, but given the state of things, I think it’s important to do what we can now, even if the effort isn’t perfect.  Its so important to at least move in the right direction.