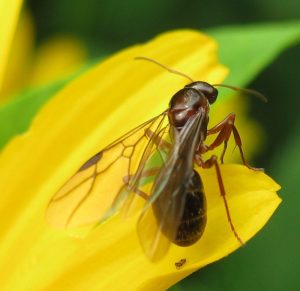 It’s about that time of year when clouds of winged ants can be observed flying in the sky or crawling over the sidewalks. This amazing sight, called “flying ant day,” occurs in late summer on a warm, humid and calm day, ideally after a rain.

Ants are social insects that live in colonies consisting mostly of female workers and a queen. Similar to their close relatives the bees and wasps, each worker has a job that is vital to the success of the entire colony. They care for the young larva, clean the nest, excavate more tunnels, guard the colony, forage for food and care for the queen.

Most ants do not have wings and only leave the colony when looking for food. However, once a year, the queen will lay eggs that will grow into new queens (princesses) and males (drones). The nursery ants feed these young a special food that allows them to grow wings. Once mature, these ants will fly far away from the home to mate. Flying a long distance helps to maximize the potential of mating with ants from different colonies. The long-winged princesses join the smaller drones in flight, in a courtship behavior called the “nuptial flight.” The queens will mate with several drones to ensure genetic diversity of her future colony. Amazingly, this is the only time a queen will mate. She retains all the sperm she needs from the nuptial flight and is able to lay thousands of eggs in her lifetime. 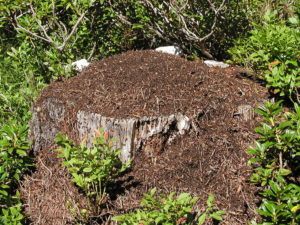 Shortly after mating, the drones die and the young queens find a suitable place to start a new colony. She will chew off her wings (it’s hard to dig a tunnel with huge wings) and excavate a chamber to lay her first eggs. The eggs hatch into larvae and she will care for them until they are adults. These new adults will then care for the queen and so a new colony begins.

Ants are very impressive insects. Trap-jaw ants generate the fastest motion recorded in the animal kingdom, closing their jaws at speeds up to 143 mph. In comparison, the fastest land animal is the cheetah, which can sprint about 75mph. The strongest ants are the Asian weaver ants, which can carry more than 100x their own weight. The most venomous insect in the world is the harvester ant, which has venom 23 times stronger than venom in a bee’s sting. Leafcutter ants construct giant nests in the tropics. Scientists excavated an empty nest that was 538 square feet and went 26 feet into the ground. The ants had to move 40 tons of soil to construct the nest. In human terms, this is the equivalent of building the Great Wall of China.

Ants are interesting to learn about and they also play an important part of the ecosystem. They help control insect pests, decompose trees, aid in nutrient recycling and are an important food source for birds and other animals. I think they are fascinating creatures and I look forward to flying ant night.

photos- an ant colony in an old stump, and a winged ant, from Wikipedia