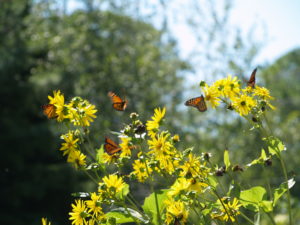 We are standing now in the midst of a great ocean of living things.  The tide is high right now, but starting to flow southward.  Our location on the edge of a Great Lake in the middle of the continent is outstanding for wildlife watching, as animals funnel down the Mississippi Flyway.  The nature center, busy as we were during summer, is ready to be literally buzzing with activity this fall.

As I drove in and parked this morning I was greeted by about 50 barn swallows perched on the overhead wire in the yard.  They are usually gone by now, beginning their migration in mid-August.  Perhaps our cold spring and summer delayed their nesting by a couple of weeks- there is still a nest with nearly grown young in our pavilion.  Barn swallows, as delicate and graceful as they are, have a very long migration ahead- all the way down to central South America, fueled by insects they catch along the way.  Up in Duluth at Hawk Ridge Bird Observatory, they are counting thousands of cliff swallows migrating past, along with other songbirds and a few bald eagles. The big hawk migration will happen in a couple of weeks.  Later some of those birds, plus those moving from the U.P. and Canada via Sault Ste. Marie, will begin to show up here using the shore of Lake Michigan as a guide along with stars and even the Earth’s magnetic field.  This morning at 4 am our dog woke me to go outside, and while standing and waiting under a beautiful clear, calm, starry sky I could hear the peeps of several of the thousands of songbirds migrating in the dark.  The fact that they can do this, sometimes thousands of feet up and invisible to sight (but not radar), is almost unbelievable.

During the same period during the day, migratory insects are also on the move.  I think most of us know that monarch butterflies travel to Mexico to spend the winter clinging to hemlock trees in certain mountains.  Well, this seems to have been another good year for monarch reproduction in our area, and the latest generation of those plus monarchs from farther north are also traveling along Lake Michigan to the south in large numbers now.  If you live close to the Lake and are very lucky, you may see a monarch roost in a tree in your yard.  Sometimes dozens or hundreds of monarchs will roost in a group for the night, continuing their flight the next morning when things warm up.  There have been at least dozens of monarchs in our butterfly garden and in the wildflowers near our building headquarters the last few days.  Similarly, some dragonflies migrate, and if you are in a field with wildflowers, or perhaps just along the Lake, you may see hundreds of green darners either flying purposefully southward, or zig-zagging as they feed on smaller insects.

But these are just a few of the hundreds or thousands of species on the move right now, either migrating or getting ready for the coming seasons.  Nature is in high gear, and interesting sights are all around us.  It is a perfect time for children to be outdoors, and we’re also preparing for a thousand or so to visit on field trips.  We do everything we can to give students a great experience outdoors on our trails (last year’s mosquito hatch was a challenge!) because we feel that is where they will learn the most.  Our nature preserve is a huge classroom, and more and more research affirms the importance of nature-based outdoor education.  Just this week I learned of studies which documented physical changes in the brains of students who were exposed to outdoor learning, and another in which researchers found that the positive emotions that one experiences outdoors are similar to those seen at Christmas, which is considered overall the happiest time of the year for most people.

So perhaps my wonder at the amazing workings of nature this time of year are very much self-centered.  Perhaps I just want to re-experience the positive feelings of the Holidays.  Well, there’s no better time of year than now, and if my desire for those good feelings results in my caring more and taking better care of nature, then I say “Merry Christmas”!