I remember a reference from the Bible in Exodus 8, where the Lord instructs Moses and Aaron to invoke a plague of frogs from the Nile that came up and covered the land.  It was apparently something you didn’t want if you were an Egyptian at the time, but, eventually Aaron convinced the frogs to return to the Nile.  It must have been considered a minor plague, as it took a lot more to convince the people of Egypt of Moses’ and God’s resolve in the matter.

Well, in the summer of 2020 it almost seems like Biblical Times around the East and West Twin Rivers.  At Woodland Dunes, its hard to walk on Willow Trail or around our nature center building without being afraid to step on a leopard frog.  They are abundant in grassy areas for the second year in a row.  We also have to be very careful when mowing, as we really don’t want to hurt them, 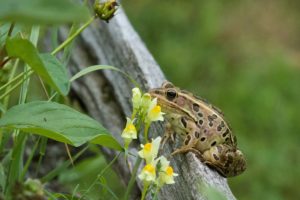 but they are incredibly numerous.  People have called, wondering why there are so many, worried about squashing them in their driveways or on roads.

Leopard frogs are hunters, and they spend a lot of time on land moving around looking for food.  They need to keep their skin moist, and are most likely to be out roaming in grassy areas when it is damp, often moving after a rain.  When it’s dry they find ponds and puddles to hang around until another wet spell comes along.  They are very good at locating even man-made water sources- there are always leopard frogs basking in the Dorothy Star garden water feature here at the nature center.

Like all our frog species, leopard frogs mate and lay eggs in water in the spring.  A female may lay up to 5,000 eggs which hatch into tadpoles and transform into frogs in late summer.  The adults go to ponds and winter under the water in the mud, needing very little oxygen to survive in the cold of the season.  They emerge in April around here, and move to ponds where the males give forth a snoring type of call that sounds like someone rubbing on a balloon with a wet finger.

Leopard frogs are important members of our local ecosystem, and also indicators of environmental quality.  Like all frogs they absorb substances directly through their skin, and don’t do well if their surroundings are heavily contaminated by chemicals.  So rather than a plague, I see them as watchdogs, and find their presence reassuring.  They also eat a lot of insects, which we humans usually see as beneficial.

If you think about the last couple of springs, there has been an abundance of water around here.  I have the hunch that there have been many more wet places for leopard frogs to lay their eggs, and those places remained wet long enough for the tadpoles to develop into adult frogs.  The last two summers there have been an abundance of leopard frogs, I think as a result of this wetness.  I would expect their numbers to stay high as long as it is so wet, and fall if we have drier years.  For now, I’ll have to continue to take care when mowing- I don’t mind slowing down for them a bit.  They belong here as much or more than I do.