Given that my birthday is on Halloween, I have always loved a good ghost story.
The scarier the better! However, the story I am about to tell you is no made-up story.
There really are ghosts at Woodland Dunes! 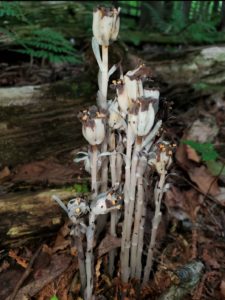 One day this summer while the other  interns and I were conducting research off of Yellow Birch trail the sky grew dark and the fog rolled in. As we got deeper into the woods, not a bird nor squirrel could be
heard. As we crept around the bend in the path there it was. A ghost! We did
not run in fear, actually, we all thought it was pretty cute. Sadly, this is not a very scary
ghost story after all. Boo-lieve it or not, there really was a ghost though, a whole group
of them at that. The ghosts we saw are called ghost pipes. The scientific name being
Monotropa uniflora, also known as a ghost pipe or ghost plant.
The name derives from the Greek word Monotropa meaning “one turn” and Latin
word Uniflora meaning “one flower” describing how they grow in single stalks with a
small turned flower on top of the stem. Ghost pipes are herbaceous perennial plants
that are white and waxy looking with occasional pink coloration that grows 4-8 inches
tall. How boo-tiful! These plants are unique in that they do not contain any chlorophyll
(hence the lack of green coloration). Since they cannot make their own food by using
photosynthesis, they parasitize other plants to get the nutrients that they need. Ghost
pipes are a special kind of parasitic plant known as a mycoheterotroph where the host
plant is a fungus that is getting its food through a symbiotic relationship with
photosynthetic trees. So, the ghost pipe is feeding off of fungi that are feeding off of
trees (talk about mooching the system).

Since the plants do not require sunlight needed
for photosynthesis, they can grow in very dark environments such as the dense
understory of woods. The ability to get nutrients without any sunlight means that these
plants can grow in areas where other plants would struggle to survive.
If you want your spirits to be lifted by seeing one of the ghosts of the woods, they
can be seen from June through September throughout Wisconsin (they actually occur
over most of North America, parts of Asia, and South America). No worries if you do not
like ghost stories though as they are not as scary as the name suggests, in fact, they
are pretty cute plants! As for this ghost tale, it has a pretty good ending. The ghosts at
Woodland Dunes are only scary to the fungi that they feed upon. For us nature lovers,
they are a cool and unique looking plant with an even cooler story of survival. Occurring
where the ghosts in the stories that I love occur, these little white plants grow in the
darkest areas of the woods where they use creative adaptions to survive.