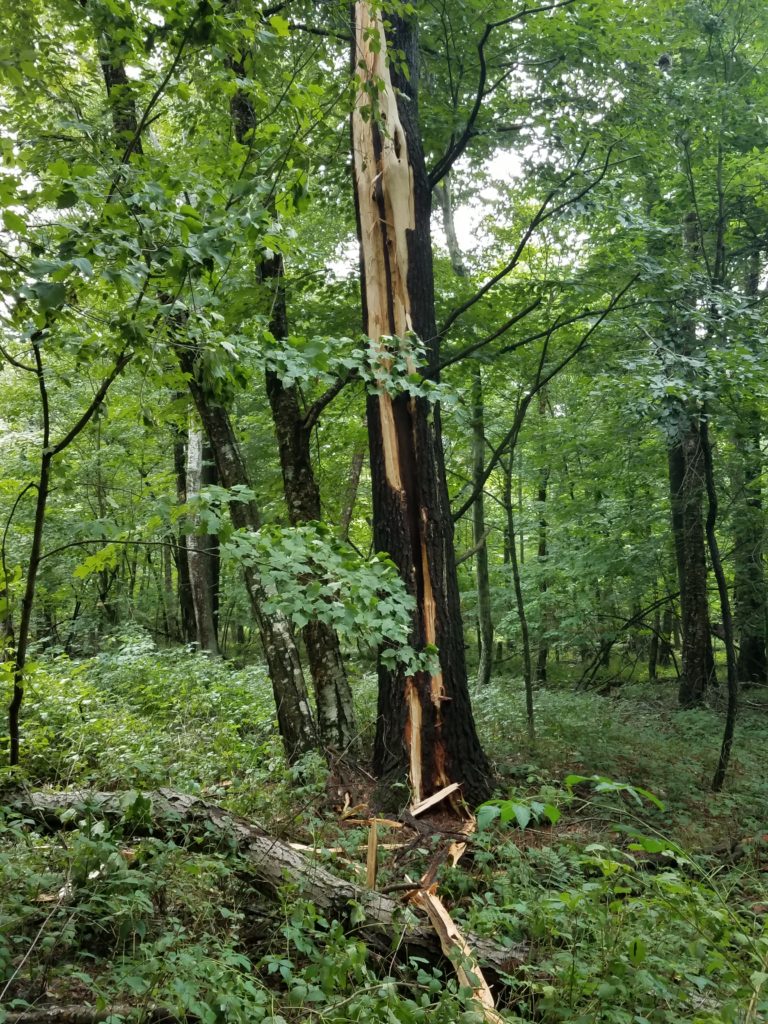 Although my memory is famously suspect, i don’t remember the last time we had three consecutive days with severe storms, and so late in the year. I associate such weather with May and June when the warmth is building into our area.  Anyway, the last week was sometimes too exciting for comfort.

I am drawn to approaching thunderstorms, probably because I have not experienced significant damage from one personally.  I can understand how living through a really bad storm or tornado would change one’s perspective completely.  Having one’s house or crops destroyed would be a terrible experience.  The most significant I’ve seen personally was a Great Plains storm in North Dakota with golf ball sized hail. I was amazed at how the hailstones careened around after hitting the ground, and how in just a minute or two took out windows and windshields and siding and left vehicles looking like golf balls instead.

It is hard to imagine that the rain we received was transported more than 1000 miles from the Gulf of Mexico and held as vapor in the air until the right kind of disturbance, or instability, came along to cause it to suddenly and violently erupt into a storm, and then flow across the landscape.

One night last week the storms came in late.  Like dogs, I too, seem to get restless before storms and so got up and went outside to watch the approach.  The air was soft and moist and warm and smelled of rain.  All around there were thousands of insects singing- tree crickets, field crickets, mole crickets, and others which are now at their greatest numbers of the year. Their music seems to blend into one huge lustful chorus, although if you listen very carefully you can distinguish different tones and cadences among them.  To me, their songs seem peaceful – the way things should sound on a summer night.

After a few minutes, the neighborhood screech owl calls – first a high pitched but descending whinny, and then a monotone trill.  I don’t understand why, as it’s beyond the time of their mating, but they seem to call more now than earlier in the summer.  Perhaps I just wasn’t paying attention.  After a while the unseen little owl moves a hundred yards away and calls some more.  Apparently he or she is not concerned about being heard by larger owls.

In the background there are flashes and faint rumbles of thunder.  Even though it is nighttime, one can see low clouds moving quickly and swirling.  Then to the west a line of dense cloud appears and advances rapidly.  As it passes over, a vigorous, cooler breeze develops.  And then the world becomes quieter, crickets dominating the soundscape.  Except that thunder is becoming louder and lightning brighter.  It rains a bit, and I think that the brunt of the storm has missed us.  But gradually the rain increases in intensity, as does the lightning.  Some appears to strike the ground, and others cross the sky like rivers of intense, blue-white light.  Then the rain and wind suddenly increase, wetting the inside of the garage into which I took shelter.  A close lightning strike reminds me that a few feet away is a metal flagpole, so perhaps even the garage is not a wise place to be.  More than two inches of rain fall that night, to be added to four the night before and two the day after.  I think of how good it is that the soil was pretty dry beforehand, and how, if it’s not paved over, it has the capacity to absorb and filter thousands of gallons per acre.  And how the wetlands at Woodland Dunes, along our lakes and rivers, and across the land store and treat billions of gallons of what was once salt water from the ocean pushed up here by unseen rivers of air.

And then the reality of the toll that storms take on the forest creeps in, and the realization that there will be seven miles of trails to check and clear and how I hope a tree didn’t come down on one of our boardwalks!

Summer storms wash the land, refill lakes and rivers and groundwater reserves, prune trees in the forest, and topple some to make room for new ones to grow.  They can be dangerous and inconvenient, but their blessings are mixed to be sure. They are also exciting, and give us an excuse to venture outdoors at night and be reminded about the interesting world in which we live.  They are worth the experience, despite the sleep deprivation.