One of the most common birds in urban areas is the house sparrow, which is not technically a sparrow in the ornithological sense, but a weaver finch.  They are a bird which originated in Eurasia. There are still local “wild” populations which don’t associate with people, and migrate north and south with the seasons.  Other house sparrows, however, have become closely associated with people to benefit their kind. 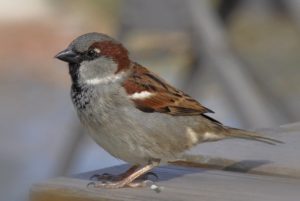 As it turns out, unlike most other birds, house sparrows carry two interesting genes.  One allows them to adapt their skulls and the shapes of their bills so they are able to utilize different kinds of seeds.  The second allows them to more efficiently digest starchy grains, making up a large portion of their diet.  The ability to adapt their populations made it possible for some house sparrows to feed on the grain that people raised (and spilled).  As people became better at farming and migrated to different parts of the world (Middle East, Europe, North and South America) some house sparrows went with them.  In the last 200 years on the heels of people, house sparrows have successfully colonized six continents- all except Antarctica.  They also adapted their nesting behavior to take advantage of the structures people made, building messy, bulky nests in whatever openings they could find.  I think it’s interesting that some nest behind lighted signs on buildings which probably helps keep them warm in the winter.  They are so associated with people that they have been given the scientific name of Passer domesticus- in Latin meaning a small bird belonging to the house.

They are rather drab birds, brown and gray; the males sporting a black “bib” on the throat and chest.  Unlike many native sparrows, house sparrows are pretty much unstreaked on their front.  Another foreign bird, the Eurasian tree sparrow, is similar in appearance and has become established in a few places in this country, but has not nearly the range of the house sparrow, which has the greatest range of any bird in the world.

There is a downside to these interesting birds- where they go they replace native species.  At the Nature Center, they compete for birdhouses with bluebirds and tree swallows.  House sparrows are very aggressive and native birds have a hard time fending them off.  Still, years ago people became fond of these little birds that traveled with them and shared their buildings, singing their familiar “cheep” song.

A friend recently sent an article from the Kewaunee paper which was printed 140 years ago, in 1878.  That year, a Judge Stransky imported 25 sparrows from Bohemia at a cost of $10 each for release because of their value in controlling insects in the garden.  I’m guessing that those were house sparrows and that must have amounted to a small fortune to bring them here.  Perhaps the sparrows we see now are descendants from those birds.

House sparrows still benefit from their human companions – not only have we moved them to new places and feed them our waste grain, but we also put out bird feeders to make sure they have enough to eat.  My grandfather used to talk about how there used to be more “English” sparrows around here when there were more horses. Apparently the birds picked seeds from the manure.  On the other hand, I also had a great uncle who devised a way to catch sparrows and use them to make a sort of sparrow pot-pie when times were hard.  I was told he was particularly proud of his sparrow-catching ability.

Wild animals are under constant pressure to survive and are often adept at taking advantage of every opportunity offered them.  In the case of house sparrows, be they common and perhaps undesirable, they have the genetic ability to take advantage of what people offer them and as a result have become one of the most numerous birds on Earth.