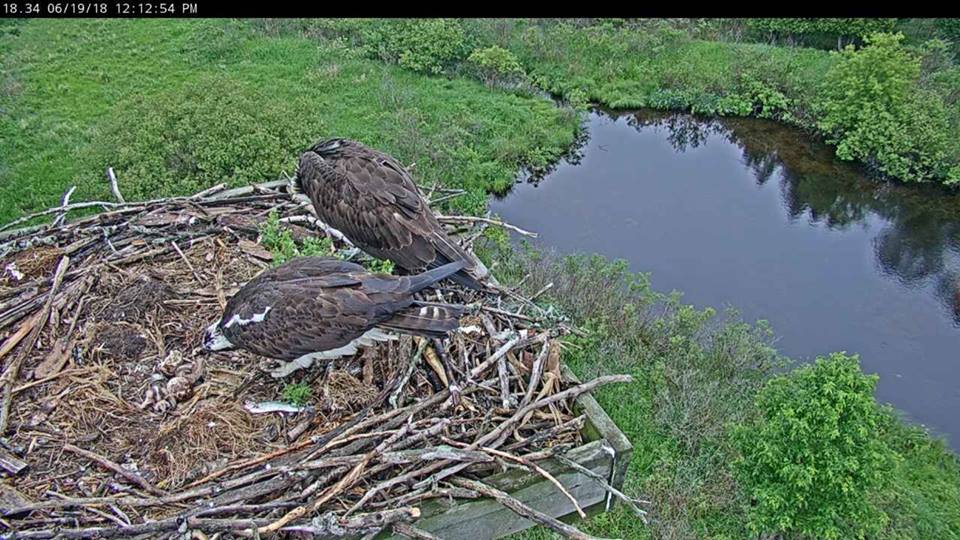 Ospreys with eggs on nest

It may not feel like it, but fall is well underway.  Unlike day-to-day shifts in the weather, the overall change in season is subtle and prolonged.  We see fall as magically beginning on Sept. 21, but nature begins the change of season in mid-August.  Large numbers of songbirds, like hummingbirds and warblers, are quietly moving southward in huge numbers.  Now is a great time to hang a hummingbird feeder or restock the oranges and jelly for orioles as they pass through.

Trees, if they are in a favorable spot, are putting out a few new leaves- a late season growth spurt.  Many have already stored all the energy they need to make it through winter.  In fields, wildflowers are abundant, and so are the insects that use them.  This seems to have been a good year for butterflies, and soon millions of monarchs will make their way down the Lakeshore intent on spending a Mexican winter.

As it has been for a number of years, ospreys are again nesting at Woodland Dunes- two nest sites actually.  One near our headquarters has a webcam, which allows us to view the birds up close and stream the images through our website.  As is the case most years, these birds arrived here during the first week of April- the 8th of the month this year.  Usually they begin nesting right away, but a blizzard a few days after their arrival caused them to seek shelter away from the exposed nest for a while.  As it turned out nesting actually began a couple of weeks late.

The first egg was laid on May 8, exactly a month after the birds returned.  The second was laid May 10, and one more on May 16.  We had some cold and stormy weather back then, but the female was diligent in her incubation duties.  The male hunted and brought back fish for his mate (although he ate first and brought half a fish back to the nest.  Mrs. Osprey would take her portion and fly off to eat, and Mr. Osprey would take over incubation until she returned- their exchange was like clockwork.  The first chick hatched on June 17, and the second on June 19.  The third egg didn’t hatch, which isn’t unusual.  Caring for two young is a reasonable task for ospreys- more than that can be difficult, although three is not uncommon.

The two hatchlings received a lot of attention from their parents, and were treated to diet of many different species of fish- whitefish, northern pike, bluegill, and lots of bullheads.  Sometimes the fish were so freshly caught they had to be chased around the nest and caught again.  One pike came with a lure attached, which was a worry to us, but the birds have avoided getting snagged on it so far.  One of the young is larger than the other, probably the first one that was hatched.  Older chicks have a big advantage over their younger siblings and often get more food from mom and dad.

On June 10 the larger chick flew from the nest for the first time.  It first flew to another unused nest platform a couple of hundred feet away, then farther to nearby power poles.  It is still coming back for a meal when the parents bring fish back to the nest.  At this writing, the smaller bird hasn’t flown yet, but it is practicing by spreading its wings and jumping on the nest, so it will fledge soon, we hope.  It’s still the middle of August so there’s time for that.

In a few weeks the osprey family will part ways and be caught up in the southward tide of migrating birds, maybe to the Gulf of Mexico, or farther south.  We will miss them when they go, but we are grateful that ospreys choose to spend their summers here.  There are at least six osprey nests active in Two Rivers, Shoto, Mishicot, Manitowoc, and Collins, allowing us to appreciate these large raptors which were never seen here a few decade ago.  We are grateful for people like Steve Lankton, Two Rivers Water and Light, N-Tech, and others who have helped with our webcam project.  The birds are still using the nest and you can see them on our website.

It seems I’m often at odds with technology, but in this case we’ve been able to closely monitor a wonderful and interesting  bird species in ways that we couldn’t just a few years ago.  The welfare of ospreys is tied closely to the health of our wetlands, rivers, and lakes, and these birds remind us of the wisdom of taking good care of our world.

photo– ospreys with their eggs on the nest at Woodland Dunes on the osprey webcam, June 2018