Two weekends ago I stumbled upon the most intriguing caterpillar I’ve ever seen – that of the Eastern Tiger Swallowtail butterfly. I briefly mistook the emerald green caterpillar for a leaf, but only for a second as I then noticed two almost cartoon-like eyes staring blankly back at me. My fascination with this creature captivated me so much that I had to drop everything I 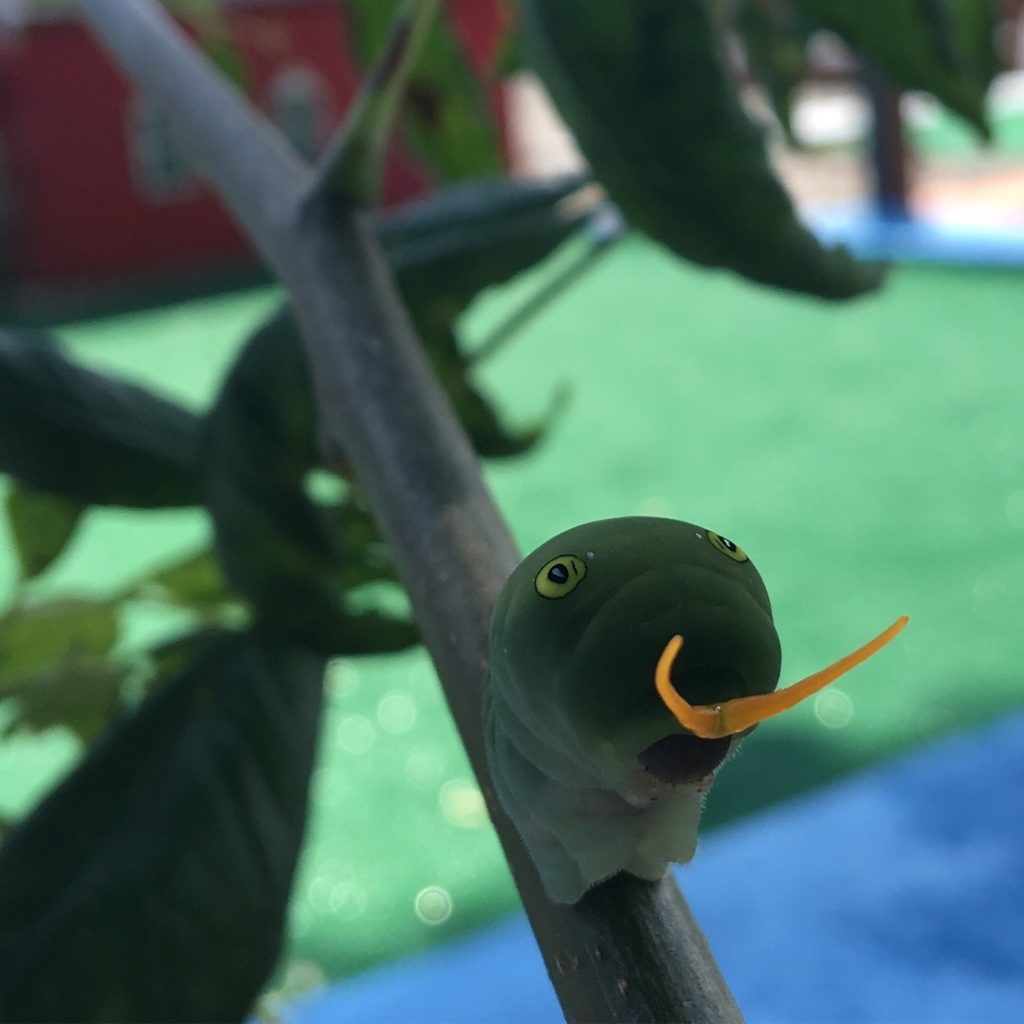 was doing in order to take what I’d guess was a thousand pictures of it. However, my camera was being finicky, so I gently adjusted the stem it was resting on to get better lighting – only to have him raise his body and display what looked like an orange forked tongue.

As I continued to observe and take photos, admiring his green velvet-textured skin, blue dots on neck and back, yellow and black striped “collar,” yellow “eyes” with a solid black outline and black pupils (even adorned with a little white sun glare mark in the center), it continued to raise its body, positioning itself. All the while, its little eyes were staring back at me with its “tongue” sticking out. I had to tear myself away from this gorgeous creature, but that wasn’t the end–I had to know more.

Luckily, it only takes the quickest Google search of “caterpillar with eyes” to find what this little guy was, and once I got that far, I was able to learn a lot more about his life and how evolution turned it into a mimicry king.

Apparently, this caterpillar comes from a whole family of deceptive geniuses with multiple species exhibiting eyespots and the orange tongue (osmeterium). While the osmeterium looks like it’s near its mouth, it’s actually located above the head, and releases a stinky substance to deter predators (which smells sweet and/or spicy to us). On top of this, its false eyespots and raised posture make it look much larger than it is, scaring predators such as: birds, hornets, and other creatures. Although I didn’t get to see it myself, the young caterpillars disguise themselves by looking like bird droppings!

After learning all of this, I wanted to know how to find more of these caterpillars. They’re fairly common east of the Mississippi River but I’ve never seen one before and neither had anyone in my family. Now, I think I’ve got some good ideas on how to find them in the wild. A big help is knowing their habitat: wooded areas along forest edges, swamps, rivers, and parks. They’re big fans of woody plants such as ash, cherry, birch, cottonwood, and willow trees that grow in such places.

So whenever you’re out, be it in the park, woods, or along a babbling stream, I hope that you all can find this wondrous little creature nibbling on a leaf while staring back at you.