Most people have learned to be wary of strangers approaching them with a clipboard in hand. Often, such strangers have an agenda, whether it be to sell you something or get you to sign a petition. One of my jobs as an intern at Woodland Dunes Nature Center is to be that clipboard-toting stranger, although my agenda does not involve extracting your money or signature. Rather, it involves education and awareness surrounding an important yet sometimes overlooked ecological issue – that of aquatic invasive species. My job is to talk to boaters frequenting local boat launches to ensure that they are aware of the laws put in place to prevent the spread of these harmful invasives, and furthermore, that they understand why these laws are important. 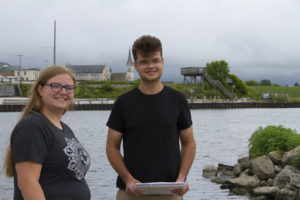 I am participating in a Wisconsin Department of Natural Resources program called Clean Boats, Clean Waters (CBCW). Since 2004, volunteers and affiliates of various environmental organizations have assisted with the program, educating boaters as well as performing inspections on watercraft entering and leaving docks, marinas, and launches.

Invasive species are non-native species that can disrupt the ecosystem they’re introduced into. In general, they are fast-growing and fast-reproducing, with an ability to disperse quickly and adapt readily to their new environment. Successful invasives may out-compete native species for food and other resources, or affect natural cycles and patterns in a way that harms native species indirectly. For example, Eurasian watermilfoil, an aquatic invasive of local concern, can form dense mats on the surface of water bodies and prevent sunlight from reaching native plants growing below the surface. From a more practical point of view, aquatic invasives can negatively impact some of our favorite water-based activities, such as fishing and kayaking. Nobody wants to cast a line where local fish populations have been crowded out by an invasive, or kayak through an endless morass of Eurasian watermilfoil.

Thankfully, the laws that address this issue are very straightforward. Before launching your watercraft or leaving the launch site, you must: inspect your craft (and trailer), remove all attached plants and animals, drain all water from motors, livewells, and anywhere else it has collected.

Live fish may not be moved from a water body, and once bait has been used at a particular water body, it may not be used at a different site. That’s essentially all there is to it! By following these simple rules, you are preventing “hitchhikers” from spreading to new habitats and wreaking havoc on the aquatic environments that we cherish.

Most of the boaters I speak with are already familiar with these laws. Educational initiatives, including CBCW, seem to be effective in this regard (some boaters I talked to had already been approached by a CBCW participant this season). However, the ongoing efforts of CBCW are still important because it only takes one uneducated boater to introduce an aquatic invasive to a new waterbody.