↓
Home Menu ↓
Skip to primary content
Skip to secondary content
September 1 is the start of biological autumn in our region.  It is already fall as far as many animals and plants are concerned, and they are wrapping up their growing season activities and preparing to either reproduce, migrate, or sleep before and during the challenging times ahead.
Insects are abundant now, and many are displaying or singing to attract a mate.  Upon mating, many will lay eggs, then die.  The eggs will either hatch soon with the young overwintering in a dormant state, or remain as they are, waiting to hatch in spring.  Others actually migrate, and if you pay attention you may see thousands of dragonflies zip-zagging above our area, snatching mosquito snacks along the way.  Green darners can migrate hundreds of miles southward- their sons and daughters returning in spring.  Some, however, stay here as larvae lurking below the surface to catch more mosquitoes at a younger age.  Monarch butterflies often migrate through our area as well- thousands of them follow the shore of Lake Michigan as they journey to Mexico for the winter. 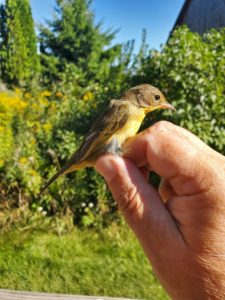 But of course we are most interested in birds, and now they are migrating by the millions each night.  Shorebirds like sandpipers go first, followed by songbirds and later raptors, then more songbirds.  Unlike spring, they move quietly through the bushes, uttering little peeps instead of raucous songs.  They take their time, picking through the branches for bugs or berries, an abundance of which are offered by plants in the fall.  Not only are they quiet, they are also camouflaged, often not sporting the bright colors of spring and summer.  In spring birders look forward to brightly colored warblers, such a joy to see.  In fall, warblers are confusing and intimidating, often hard to identify.  A barrage of little olive-colored birds uttering only peeps as they move through the bushes, or flying high above at night.
Woodland Dunes has always been a bird banding station, where wild birds are caught, measured, banded, and released.  We gather data on the birds during migration, and hope that another bander will catch the bird later.  Dozens of species of birds have been banded here.  Many people know about the saw-whet owls that we catch in fall.  But in fall, winter, and spring we also band songbirds when time allows.  We don’t spend as much time as we would like in that pursuit- funny how other work gets in the way.  But we do catch and band some, and fall has always been an important time to do that.
The last few nights have been very good for bird migration, and its often apparent especially first thing in the morning.  A few days ago there were catbirds everywhere, seemingly complaining from hidden perches among the leaves with harsh “meows”.  Overhead swallows, chimney swifts, and nighthawks are moving, especially in the evening.  At dusk, geese and ducks move back and forth from their local hangouts.
Recently, we opened our nets to see what birds we might band, on a morning following a good migration night.  Birds were everywhere in the bushes, gobbling up the last of the dogwood berries and small insects, constantly on the go.  Out of the hundreds, three allowed themselves to be caught, all warblers, and all young birds.  The first was plain olive on the back, and yellowish on the belly.  A tiny bird, only weighing about 10 grams.  It had a slightly lighter ring of color around its eye, and a slight bit of gray on the top of its head.  All of those characteristics added up to identify the bird as a Nashville warbler, a fairly common migrant here, and a bird which nests in the north in conifer trees.  After weighing the bird, measuring its wing length, and estimating the fat on its belly and throat, the banded bird was released to continue its migration.  It will probably hang around for a few days to feed and build up fat- it was very skinny.
The second warbler was streakier, with slight wing bars (lighter lines on the wings), and the bottom of the feet were yellow.  It was very yellow beneath the tail, which had white patches on either side.  This was a Palm warbler, another common species during migration, another young bird, hatched this year.  It went through the same measurement procedure, and was also released.
The third warbler was again dark on the upper sides, yellowish on the underside, with faint gray streaks on the chest.  It had some streaks around the eye, and bottom of the beak was bright yellow-orange.  This also appeared to be a young bird, in its first year.  In fact, only a couple of months old at most.  It was a pine warbler, a bird usually found high in large pine trees.  Same procedure, and release.
All of these birds nested to the north, they were not local birds.  On good nights with quiet winds and clear skies, these little songbirds manage to fly 150 miles or so, and must be exhausted by dawn.  It is critical that they have places like ours in which to feed and rest as they travel thousands of miles.
It’s a privilege to be able to catch and study these birds, adding information to their story.  We are careful not to harm them, and are licensed to do this work.  We hope to learn enough about them to ensure their continued existence in the face of all the changes that we people create in the world.  As we release them, we wish each one a safe journey, and hope that we meet them again.
Photo- Nashville warbler banded at Woodland Dunes by Kennedy Zittel