If you have been out near the observation tower at Woodland Dunes recently you may have noticed some small holes nearby in the ground. And, if you had hung around for a bit you might have even seen the creator of those little holes running around. That little burrow belongs to a thirteen-lined ground squirrel (Ictidomys tridecemlineatus). These ground squirrels are found all over the state of Wisconsin and are found across grasslands and prairies of North America. 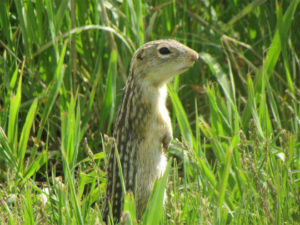 You may have guessed based on its name, that the thirteen-lined ground squirrel has brownish-yellow fur with 13 alternating brown and white longitudinal lines down its back and sides (sometimes broken up into spots). This color pattern helps them camouflage in tall grass.

They are diurnal (awake during the day) and are most active on warm and sunny days. If the weather is poor they are likely to stay inside their burrows. Can’t really blame them for that, I would prefer to stay in bed if it’s rainy too!

They keep their burrow entrances very tidy, so if you see dirt thrown out near the entrance of their burrow they just got done “sweeping” the loose dirt out with their back feet! After they go past their tidy entrance, their burrow forms into an L shape, this is to try and minimize burrowing predators from digging down after them, because it tricks the predators into thinking there is a dead end just beyond the entrance. After the L turn their burrow can be 15-20 feet long and can consist of several side passageways. Most of their burrow is within 1-2 feet of the surface.

The safety-conscious little critters also stand at attention (called picket pin posture) on their hind legs to watch for any nearby danger. They also tend to dart quickly through tall grass along the same path from burrow to burrow, as if they have their own little roads! The ground squirrels also dig shorter burrows that they use as hiding places along their route… how smart! They make little whistle-like noises and “churr” calls, but will give off a very loud “trill” alarm call to warn nearby ground squirrels of any danger. It seems to be quite common for them to give their warning call as we walk by the tower, it’s nice of them to think we would be fast enough to catch them.

Thirteen-lined ground squirrels feed on mainly grass and plant seeds, but will also eat insects (especially grasshoppers, crickets, and cicadas), and they can even catch and eat mice and shrews.

Around October, they will go into their burrow, seal off the entrance, and hibernate in the deepest part of the burrow. During this time they use up their stored fat to get through the chilly winter. Their heartbeat will change from 350 beats per minute to only 5! They also decrease their breaths from 100-200 breaths per minute to only one breath every 5 minutes! When they wake up in March or early April, they will eat the food that they stored during the fall.

Ground squirrels play an important role in the ecosystem. Their burrowing helps recycle nutrients into the soil and they are an important food source for predators like raptors and snakes. I enjoy seeing them run around near the barn, and I hope you can come out here before October (when they go to sleep) to see them race around too!

photo by US Fish & Wildlife Service