I do not know when my love for water began.  I certainly did not like getting my face wet or putting my face underwater during swim lessons as a kid.  Those swim lessons were important though because I was born on a peninsula that is basically an island.  I grew up a block away from Lake Michigan.  Many summer days were spent on the beach. 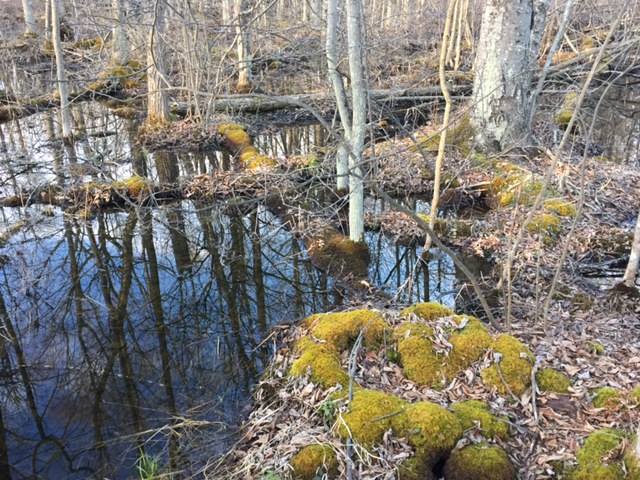 In middle school, when asked what I wanted to be when I grew up, my answer was a marine biologist.  I was fortunate enough to go on a marine ecology trip to Florida in high school.  Unfortunately, there isn’t any salt in Lake Michigan and I didn’t have a desire to leave my family to move near the ocean.  Instead I pursued a college degree and freshwater opportunities closer to home.

My first water-related jobs included supervising aquatic plant treatments on lakes and surveying cool water trout streams. I surveyed lakes for aquatic invasive species, which included getting paid to snorkel! Eventually I was led back to my home town and the rare opportunity to be the land manager for a now 1,500 acre nature preserve.

Woodland Dunes Nature Center and Preserve includes both terrestrial habitats such as prairies and upland forests and aquatic habitats such as wetlands and creeks.  While there is no salt water, there is globally significant habitat and many rare plant and animal species.  What a dream come true to be able to get paid to learn more about this unique area and take care of these ecosystems.

A lot of focus this summer has been on our forested swales.  These coastal wetlands are rare habitat and face many challenges.  Over the years, invasive species such as honeysuckle, Japanese barberry, and buckthorn have encroached into the heart of the Preserve.  We are just starting to understand the full impact these invasive shrubs and trees have not only on our vegetation, but also on our animals, such as frogs, and insects which inhabit the water.  Invasive species are not just large things such as trees; invasive insects also threaten our swales.

The emerald ash borer is slowly making its way closer to our preserve.  After the loss of elm trees to Dutch elm disease, ash trees took their place in the canopy.  Approximately 80% of our forested swales are occupied by ash trees.  When these ash trees are eventually killed by the emerald ash borer we don’t want an opening for invasive species to further degrade the ecosystem.  This summer, with funding from the United States Forest Service (USFS), Wisconsin Public Service, and The Natural Resources Foundation, Woodland Dunes staff, interns, and volunteers removed invasive honeysuckle, buckthorn and barberry. In addition, they planted approximately 3,000 trees in our forested swales. Next year we will finish out the USFS grant by planting an additional 2,500 trees.  This effort will continue as resources allow.

We are fortunate to live near such a gem, and we feel strongly that we need to do to preserve it.  I encourage you to go out and explore our trails, and have a swale time!