As is for many of us, fall is my favorite season 0f the year.  The relief from summer heat and humidity is refreshing and I feel like being outdoors and getting things done, by gosh.  Besides, there are so many migrant birds to be seen along with fall wildflowers, butterflies, dragonflies- a bountiful harvest for the eyes.

Things were going along just as planned this year.  The hot weather broke and the sleeping was good. It was a pleasure to be out working on the trails and finishing the planting of this year’s trees.  Even the mosquitoes and deerflies, which were so abundant during the summer, finally began to subside to the point where repellent wasn’t needed.

And then, we had three days of heavy storms and 10 inches of rain, and the return of warm weather.  After the rain stopped, we happily prepared our main trail for the coming herds of first graders to come for fall field trips.  You would think with all the time I’ve spent outdoors in the last 60 years, I would have seen it coming, but I was oblivious.  As we worked on the trail, a few mosquitoes popped up a week or so after the rains.  Then, a day later they were far worse, and by the next day, about 10 days after the storms, their numbers were incredible.  It was the same at home, on the lakeshore, at the harbor, and everyone I talked to had the same experience.  We have blundered into the trifecta of mosquito reproduction, and our lovely fall world has been rendered less enjoyable.

I am not an entomologist, but I did spend some time working in the public health field.  It appears that we are experiencing an outbreak of inland floodwater mosquitoes, probably a number of which are Aedes vexans, a mosquito species found around the world.  Their ferocity is a product of their numbers, small size, and tenacity, and their potency as a nuisance is matched by their brilliant reproductive strategy.  They lay eggs not necessarily in the water, but in leaves just above the waterline, in anticipation of future flooding.  Vegetation helps keep the eggs a little moist and helps them survive sometimes for years. Cold winters kill off some of the eggs, but last year’s winter was warmer than normal.   If they are flooded when the water is cold, as in spring, they hatch and develop slowly.  Now, however, floodwater from our recent rains was nice and warm.  The eggs hatch and larvae swim for about a week, then pupate for just a couple of days, and then the adults take flight- so the 10 or so day delay between our storms and the swarms that followed indicates that conditions were just about perfect, mosquito-wise.

So what now?  Well, adults live for 3-6 weeks, so if we don’t get ridiculous amounts of rain again things should slowly get better.  Both male and female mosquitoes feed on flower nectar to survive, and there are a lot of flowers blooming yet.  Females need blood to produce eggs.  Those females can lay multiple batches of eggs, poised above wet places in anticipation of flooding to come, so there will be plenty of potential future mosquitoes out there after things dry up.  Those eggs can survive without hatching for years, waiting…

In the meantime, we can take a little comfort in that migrating birds, bats, and dragonflies must be eating untold millions of the little pests.  And spider populations peak now and their webs sit ready to strain mosquitoes from the air.  Of course, the blood of animals helps feed the little bloodsuckers also, so that may be a wash.

I recently watched a doe and two fawns come to apple trees, as they do frequently, to feed on the windfalls.  Rather than feeding in a normal way, some part of them was constantly in motion- ears twitching, tails flicking- until after a few minutes in the open and presumably being continuously bitten they suddenly jumped up one by one to first hop, then run into the taller vegetation, looking like they were trying to escape among the dense stems.  As much as I enjoy camping, I shudder to imagine what it’s like to live outdoors right now, pursued by mosquitoes 24 hours a day.  And at populations reported at Madison to be 10 times higher than normal. 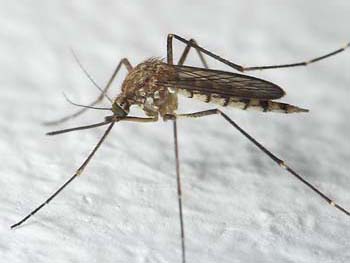 So, if we dry out I won’t complain about having to water the flowers, and if the winter is cold I’ll try to remember that there’s an upside to even that scenario.  However, until things improve (for people, not mosquitoes) you’ll know me by my DEET scented cologne and irritated disposition!