Birds were feeding quietly at the feeder this morning- house finches, gold finches, cardinals, and a brown thrasher that has been coming in for snacks for the last couple of weeks.  Suddenly they startled and disappeared into the shrubs surrounding the feeding station.  A few seconds later, a large female Cooper’s hawk came through like a missle.  Her efforts were wasted, though, and she came up empty-handed, or perhaps empty-taloned, and lighted on the branch of a large tree to plan for the next attempt. 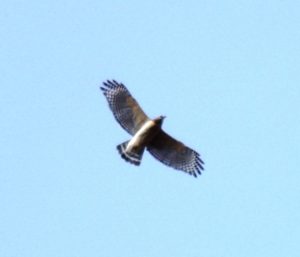 A few days ago while out on the West Twin we saw a large bird on one of the osprey nest platforms.  I didn’t look closely at it, just assuming it was the osprey that nested there and that it hadn’t migrated yet.  Instead, the bird dove off the platform and began chasing nearby gulls, and I noticed the typical pointed wings and sleek torso of a peregrine falcon.

Along with millions of songbirds migrating south this fall come millions of hawks, and its not uncommon to see new birds daily.  Their methods and patterns of migration is quite different than their smaller cousins, however.  While many songbirds migrate at night when the air is calmer, hawks migrate primarily by day.  Many depend on wind patterns to aid them on their journey.  Some, like peregrine falcons, actually seem to migrate when the wind is from the southwest.  These birds do not soar like some hawks, and the wind in their face helps give them lift as they power southward.  Many, however, depend on thermal air currents to lift them high into the sky after which they point in the desired direction and glide for miles until they need to find another thermal.  Many other birds do the same, like sandhill cranes and pelicans, and it is a very efficient way to cover long distances.  Conditions are right for thermals to form when its a sunny day, and it’s best when the wind is from the north to further aid their gliding journeys.  Often they orient themselves to fly parallel to north-south ridges or in our area the shore of Lake Michigan, where winds are lifted by bluffs and other features.  Woodland Dunes is a good location to view migrating hawks on suitable days and often high in the sky.

Other notable places for hawk migration include Hawk Ridge Bird Observatory in Duluth MN, which hosts a celebration of hawk migration this time each fall.  Hawk Ridge, at the tip of Lake Superior, is a place where hundreds of thousands of birds are counted, and some banded for research.  They have a team of hawk counters, and naturalists who point out the different species as they fly by.  The ridge is so high that sometimes one looks down on the birds as they pass by.  The Cedar Grove Ornithological Research Station just south of Sheboygan is another hawk banding site which captures and releases many birds each fall for research.  They are not open to the public due to their small staff and large workload, but they contribute much to the understanding of raptor migration in Wisconsin.  Woodland Dunes does not band hawks at this time, rather our focus is to manage our preserve to be an excellent migratory stopover area for both hawks and songbirds.

We are already at the peak of songbird migration this fall.  Hawks are moving too on good days.  Looking at Hawk Ridge’s observations- a lot of bald eagles have already been heading south along with peregrine falcons, and lately, sharp-shinned hawks.  When the broad-winged hawks of the northern forests begin to move on their non-stop migration to Central America, counters will record hundreds of thousands of birds.

The seasonal movement of birds is a complex and wonderful highlight of the natural year, and like so many natural events often goes unnoticed now.  On a sunny day with a north wind between about 10am and 3pm, look up, and you may be rewarded with an amazing spectacle unfolding right before your eyes.