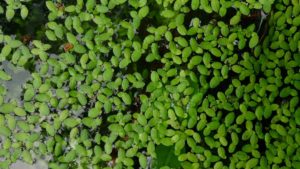 The other day I was driving over a bridge in Two Rivers and was surprised to see the surface of the lower West Twin covered with a light green haze of algae.  I was also told that the East Twin and Manitowoc Rivers are also experiencing similar blooms in their lower sections.  For some reason, this is a very good year for growing duckweed.

Duckweed is an interesting little plant- the smallest flowering plant there is.  The entire plant consists of a handful of tiny leaves which float on the surface of slow-moving or stagnant waterways, ditches, and ponds, with equally tiny roots that hang down. There are several species of plants in the duckweed family around here ranging from giant duckweed (which is still only ¼ inch across), lesser, little, and least duckweeds, and the even tinier water meal, which just looks like very small grains of green dust floating in the water.  And yes, ducks do eat duckweed, although I think it grows as fast as it is eaten.

Duckweed produces very tiny flowers which are mostly unnoticed. More importantly, it reproduces by budding and fragmentation, producing tiny leaves which become new plants. In that way it can quickly colonize new areas.

So why is there so much this year? That’s a very good question. For one thing, duckweed grows abundantly where there are lots of nutrients in the water and we humans are really good at fertilizing our waterways. Nutrients include leaves and dirt that wash in with stormwater, lawn fertilizer, and any soil that is allowed to erode and flow into the rivers. Phosphorus is often a nutrient which limits growth of aquatic plants, and phosphorus accompanies soil that is washed into waterways. Tons of soil wash into the East and West Twins and the Manitowoc River thanks to human activity, and there are plenty of nutrients for duckweed to utilize. We are on pace for record precipitation this year, so there are lots of opportunities for nutrients to enter our river systems.

Duckweed is a valuable part of the ecosystem, and they are native plants. Like so many aspects of life, too much is not necessarily a good thing. Although animals eat duckweed, it can become so abundant that it coats boats and makes water look less than inviting. It can also shade the lower part of the water column so that algae can’t grow below it, and when they die they consume oxygen in the process of decay, sometimes to the point of causing problems for animals.

A type of algae – the blue-green variety, is also found in some waterways and lakes and builds up an unappetizing scum on the surface. Blue-green algae scum can be somewhat multicolored and in it you can’t distinguish the flat, floating leaves or buds of duckweed.  Blue-green algae can also be toxic to pets or cause skin rashes on people who come in contact, and you certainly don’t want to drink the stuff.

Soon, cooler temperatures will cause duckweed and other algae to die off, and generally in fall the water becomes clearer.  In the meantime, we should think about how we can keep excess nutrients out of our rivers and lakes so that they look and support life better.