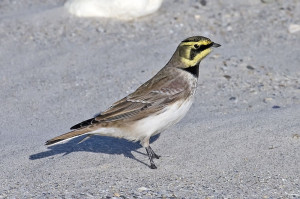 What a treat to be driving home from a meeting mid afternoon last Wednesday, the most beautiful day of the winter.  Bright and sunny- blindingly so- and nearly 40 degrees, the world seemed so benign.  Here and there horned larks, usually our first migrant songbirds, flew up from the side of the road where they had been picking at gravel.  Last week there were very few, this week there seem to be more, but perhaps the light winds and sun tempted them out of more protected places.  With two feet of snow in many places, they need to come to the roadsides to find the grit their little gizzards require to help them grind the seeds they eat.

Juncos also flew up from the road as I passed woodlots that contained red-osier dogwood.  Stands of sumac and wild apples were scanned for wintering robins, but none were found.  Still, the snow, sculpted into waves across the fields, created a beautiful landscape.

Then, looming up on the right was a chocolate streak over the white- an ambitious farmer had cleaned out his barn and spread manure.  There are three things that birdwatchers covet in the winter- manure spreads, bushes with berries on them, and open water- the trifecta so to speak.  Sure enough this recent spread was worth a stop.  The larger birds were obvious- about 40 crows, whose intelligence is the subject of much study and some interesting YouTube videos, patrolled the higher ground.  Among them were rock pigeons, a once wild European species which is now more likely to be found living among people on several continents.  There were several color phases present- the normal dark-gray/blue body with light gray wings, plus a number of other interesting birds with blotchy brown and white plumages. 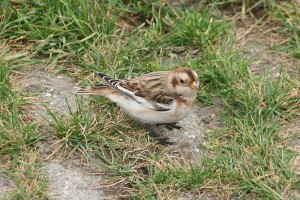 Among the big birds there were others that required closer inspection. There were a couple of dozen horned larks- dashing little songbirds with black masks and tiny ear tufts, picking at the manure and sunning themselves.  I admire their hardiness- they prefer open fields and fencerows and can withstand terrible weather.  Every few minutes one produced a slight tinkling phrase- a preview of the wonderful songs they will begin performing in a couple of weeks, flying above the fields.

Among the horned larks were other birds, though- as they briefly flew they flashed white, then lighted on the brown streak again.  Snow buntings, again a couple of dozen birds, and perhaps the same flock seen in the neighborhood around Christmas.  They bobbed up and down in the tractor-tire tracks, their black and white winter plumage effectively disguising them on the winter field.  They seemed to disappear and reappear every few minutes.  We’ll probably see more of them as they migrate north in the next couple of months on their way back to their Arctic summer homes. 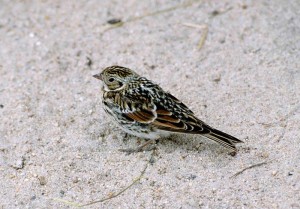 Other birds of open fields this time of year include Lapland longspurs, which can gather in very large flocks, starlings, and gulls which will soon be looking for worms in the furrows.  If one is lucky, a gray partridge might be found.  None were seen in this case, but it’s always worth looking.

Awareness leads to understanding, and you can only really appreciate what you understand.  I don’t know if appreciation of a manure spread is the pinnacle of understanding nature, but it is certainly interesting how barn cleaning can impact the ecology of a field, and not necessarily in a bad way.

At the least, it can make a routine drive in the country much more interesting.