Recent large spills of toxic substances into rivers in West Virginia and North Carolina obviously illustrate the need to protect waterways.  In both cases it appears that the danger posed extends beyond wildlife to threaten human health, which is what it often takes to motivate people to deal with environmental problems.  Woodland Dunes borders the West Twin River, and the wetlands within the preserve are intimately connected to it.

Early descriptions of the area around Manitowoc and Two Rivers clearly demonstrate how important our rivers were to early inhabitants.  The first Europeans travelling on Lake Michigan noted Native people at the river mouths, which were surrounded by wetlands that provided habitat for various birds, mammals, spawning fish, and probably contained valuable plants like wild rice.  Up and down the coast, the river mouths contained such wetland estuaries.

But land with water access was important to commerce, and marshes are not very usable.  After European settlement, many coastal wetlands were filled so the land could be buildable, and so that those buildings and docks could extend to the water’s edges to make shipping accessible. Today there are only a few of these coastal estuaries left.  Waste was deposited directly into the rivers, and dilution was the treatment method.  As the population grew, dilution of the waste was not enough-eventually to the point that there were panics about typhoid fever caused by possible exposure to the water.  After humans were impacted by disease, we turned to technology to solve the problem, and better waste treatment systems were devised.

About the same period, Wisconsin was largely deforested; the cutover, as it’s called.  First large pines, then later hardwoods were harvested from across the State including our area.  The wood built and fueled our area, but left large scars on the land.  People didn’t realize that forests retain almost all of their nutrients, including phosphorus, both recycling them into new plant growth, and largely retaining water and allowing rain and snow to soak into the soil rather than run off into streams and lakes.  After the cutover, the open land, converted to farms, continued to erode, the runoff carrying tons of soil and nutrients into rivers.  Half of the wetlands, which also filter soil and nutrients from water, were filled or drained.  And roads with ditches carried runoff more directly to waterways. 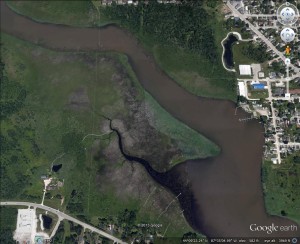 In the 1930’s people became motivated to address erosion to some extent when it affected their agricultural livelihood. In the 1970’s, awareness of runoff and chemical contamination of land and water was increased.  Still, and estimated 1700 tons of soil is washed into the West Twin each year, and each soil particle carries with it some phosphorus.  Most of that soil is washed into our rivers during a few rain events in spring and summer, especially if there is a heavy rain during snowmelt or before crops are growing.  Nutrients from fertilizer, animal waste, grass clippings, and other sources also contribute to the loading of our rivers by nutrients.  The result is cloudy water, and excess growth of algae, either visible (weeds) or microscopic.  In the rivers around here, it’s the microscopic version that contributes largely to decreasing water quality.  The algae, suspended in the water, make it cloudy and prevent light from penetrating, and contribute to wild swings in the amount of dissolved oxygen in the water.  During the day when all those algae cells are working, they produce oxygen, but they consume it again at night.  When they die, the bacteria that decompose them can consume even more oxygen, and the result can be an environment that supports only rough fish that don’t need as much to live.  On top of that, non-native invasive fish, like carp, root around in the mud and stir it up, re-suspending the soil and clouding the water even more.

With reduced water quality our rivers support fewer desirable fish and plants.  Cattails will tolerate poor water quality, but other plants like wild rice will not.  And because plants provide habitat for animals, other wildlife- birds, mammals, insects- all change in response to water quality.  American bitterns and black terns were birds that used to be common in wetlands along the lower West Twin.  Now we record a bittern or two a year during migration, and the black terns have been gone for 15 years.  What changes in the world caused these declines?  We don’t know.

How we have treated the water and the land around it has resulted in the rivers we have today.  In places where water quality is better, many species of native wildlife hang on, and if we work to improve our rivers overall those species might repopulate other areas.  It’s a matter of how much we value our rivers, even if they aren’t spoiled to the point of making us sick