“Oh I wish it was spring!” I wonder how many times those words were uttered the last couple of months. Well, here it is, in all it’s muddy glory. That’s not meant in offense of mud, but rather in praise of it. At least in the country, beyond paved sidewalks and driveways, March mud creates it’s own sort of madness. Those driveways squish and undulate, kneaded into ruts by our tires until they are completely thawed. Creeks and road ditches run full, the water colored by the mud which has either blown or been washed off bare fields. The first redwings sing their approval of the liquid landscape, as do the sandhills and killdeer. They had to wait extra weeks this year before returning with seeming extra urgency to claim or re-claim the best breeding sites. But while they oversee the big and lofty picture, I wonder if they’re aware of the massive goings-on down in the mud-scape.

One could see the portends of spring a couple of weeks ago- the willow branches seem to suddently brighten up, as do the twigs of the red and silver maples, presumably as the first tiny amounts of sap begin to flow. The buds of those willows will soon swell and burst forth as catkins, one of the first flowers of spring. My grandfather, who was a little competitive, always wanted to be the first to bring home a sprig of pussy willows. Beneath the willows in the wetland mud the skunk cabbages are beginning to send up their unearthly, leathery, speckled purple flowers which emit a stink to attract insets which they enlist in the trasfer of pollen. I think their adaptations to this sort of reproductive life are fascinating, but leave much to be desired in terms of romance. 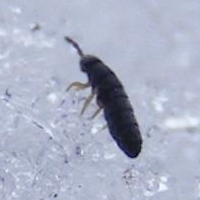 Surrounding the skunk cabbages, at least those above water, are untold millions and millions of springtails, who begin to make their way to the surface, even the surface of the remaining snow for reasons I don’t yet understand. Sometimes they gather by the millions along the water’s edge along the forested swales at Woodland Dunes, hopping about on the leaves and fallen trunks. They’re also called snow fleas, but they aren’t fleas at all, feeding on fungi and vegetation in the soil rather than blood. On a close look they are long and narrow and have a velvety blue-black color. They are far more abundant than the wildlife we can easily see, and though unseen and unnoticed by us, are probably a profound influence on the forest ecosystem. In fact the tiny insects and their fellow arthropods, along with the hundreds of thousands of species of bacteria, fungi, and other organisms, are probably the most important wildlife in the forest. Many of them have symbiotic relationships with the plants and animals we know, supporting the function of plant roots, the immune systems of animals, and the transfer of energy from one ecosystem level to another. And I think most biologists agree that we barely have the rudest understanding of many of the function or even the identity of many of these soil-citizens.

In the thawing mud these creatures, along with reptiles, amphibians, and many other animals are again released to begin their reproductive lives. We should take care to appreciate the importance of these things and what they do even if the purpose doesn’t seem obvious to us at the moment. For many, their function and “purpose” is yet to be discovered, and lowly as they seem now, our lives may depend on them. Besides, as Dr. Tysson of the Cosmos series points out all of this mud, and everything else for that matter, is made of stardust which has been around since the beginning of the universe. As Pig Pen of the Charlie Brown comics said “Kinda makes you want to treat me with more respect, doesn’t it?”