Despite the cool weather lately the natural world is being re-populated with spring migrants. During the Ice Age, when summer and winter temperatures varied dramatically, animals, especially birds, probably began these seasonal movements to take advantage of large areas of summer breeding habitat loaded with insects and other food for a few months. This adaptive behavior continues, although the migrations we see now have fewer birds as many of those species have declined in population in the last 150 years.

Last week the wetland ponds at Woodland Dunes were still frozen, but there were many ducks in the process of migrating to summer habitat looking for stopover places to rest and feed. Although our wetlands were frozen, there were small puddles in a cornfield across Woodland Drive from our preserve, and one in particular had a number of species in one group. It was worth a quick stop to take a look at them.

Fortunately, the farmer who works the field left the corn stubble on for the winter, protecting the soil and providing cover for small field birds like tree sparrows and horned larks. As the snow melted, waste corn was exposed, and that in combination with the seasonal puddles made this a good stopover site for migrating waterfowl. Of course there were a few Canada geese, now much more common than when I was young, and here nearly year round. They are highly variable in size and color, and scientists constantly debate their classification. There are large and small forms of Canada goose, and a few years ago it was decided that they were different species- the large subspecies being called Canada goose, and the small forms called Cackling goose. Within each there are still several subspecies recognized, and in our area it’s not unusual to look at a flock of geese and find birds of several different sizes. 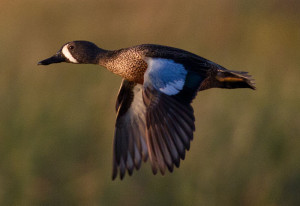 While the geese were obvious due to their size, around them were a number of ducks- some large and some small. In the 50 foot-long puddle were a number of mallards, with males looking very handsome in their breeding plumage. Hunkered down near the mallards were some other green-headed ducks with much more white on their bodies. These were male shovelers, ducks with enlarged black bills and beautiful plumage. 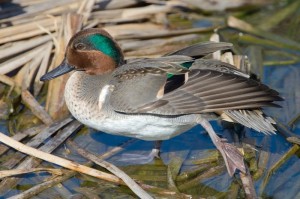 On the near side of the pond were very small ducks that appeared dark overall- two species of teal. The male blue-winged teal had a crescent-shaped white mark on their face and powder blue patches on the wings. The green-winged teal have a rusty-brown head with a broad stripe of green on the face and green wing patches. The females of both species are mottled brown, better camouflage for nesting.

Then another look at the shovelers revealed a couple of other whitish ducks- male pintails. Pintails are one of the most graceful species in appearance, with long necks and brown heads with sweeping comma-shaped white marks extending down to the chest. Again, the females are brown.

Six species of ducks in such a small puddle is a nice find, but one more look at the mallards was in order. Sure enough, in a group of three near the hen mallards was another dusky gray species with a black backside- gadwalls. Although they are common, gadwalls are probably overlooked because they are not brightly colored, but like the cedar waxwing one has to look closely at the bird to appreciate how beautiful they are. 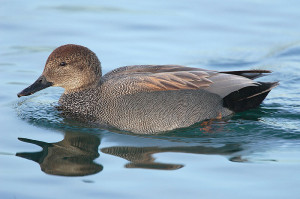 So despite awful weather, it was a good day for birding. Often weather causes birds to “fall out” and take a day off from migration until conditions improve, and those days can be some of the best for finding them. In addition to the puddle ducks that day, flocks of tundra swans were seen making their way northwest, and a mature bald eagle flew over looking for an easy meal. A very good day, indeed!