All the phenological wheels are in motion now that some warmer weather has come. Skunk cabbage flowers are popping up all over the swamps, and melting ice invites frogs and salamanders to their own special brand of cold water romance. Woodcock are dancing in the twilight in all the brushy areas of the preserve, but so far we haven’t seen or heard any common snipe which are unfortunately far less common than in years past.

There have been a number of migrating raptors lately also- bald eagles, harriers, Coopers’, red-tailed, and red-shouldered hawks, turkey vultures, and the small falcons kestrels and merlins. We’ve been especially waiting for ospreys to return, as they have for the last 15 or so years. 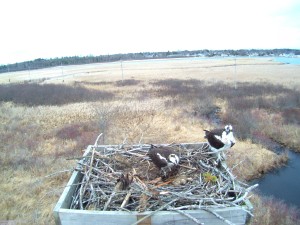 Ospreys are large, fish-eating hawks, found in many parts of the world. In the United States, ospreys and bald eagles were on the verge of being eliminated due to the use of DDT insecticide. In the 1960’s and 1970’s few were seen around here. Since DDT was banned here (it’s still used in some parts of the world), the populations of ospreys and eagles have increased significantly, and they nest in areas which had not been used for many years.

Last year, a pair of ospreys nested on a platform very close to our headquarters. Despite the occasional people walking around our buildings they successfully raised three young to fledging, and all departed, one at a time, in September. Ospreys (or osprey) migrate individually, and males and females apparently spend the winter apart. We knew that the pair was likely to return if they could, as these birds have a reputation to being faithful to successful nest sites, so we waited hopefully throughout the long winter. Thanks to grants we were able to obtain from Cellcom and the Forward Endowment, and with the help of Two Rivers water and Light Dept., in late March we were able to install a video camera on the platform to allow us to see the birds on the nest and ultimately give access to the public to the video on our website.

On Monday last week a single osprey appeared, right on schedule. The bird inspected the nest and brought in a few new twigs and such, then retired to the tops of nearby power poles to seemingly wait for his long lost love to return. Sure enough, two days later a second bird arrived. Both birds inspected the nest, and the male, which has a band on his leg, has been rearranging sticks and reeds and moss while the female stands by and supervises. They occasionally fly separately and return to the power poles with fish, and on one occasion the male brought a fish to the nest and it was quickly taken from him by the female who then flew off. I thought perhaps a little more appreciation might have been shown for the gift, but the male doesn’t seem to be discouraged.

We’re still working out the bugs on our osprey nest camera, but we hope to have a link on our website to allow public viewing soon. Til then, you can stop by the nature center and see what’s up with the birds. Conservation Education Inc., who operate the Neustadter Nature Center at Collins Marsh have had an osprey nest camera for several years now, and you can view theirs at collinsmarsh.org. They also have two birds on that nest platform, and there are more in the marsh.

Many people didn’t know at the time, but the decline of ospreys indicated mismanagement of our environment. Had their decline continued to be ignored, there probably would have been even more widespread consequences. Fortunately our leaders looked at research and made management decisions on that basis. Yet in a recent poll in Wisconsin, only 1% of respondents considered the environment to be an important issue. Let’s hope we don’t forget how powerful we are in this world, and what the unintended consequences of our actions might be.