I am one of those people who doesn’t mind seeing my lawn turn brown in mid-summer, which is probably a sign of my dislike for the chore. Each year more of my country lawn shrinks as wildflower beds expand (I’m thankful for neighbors who have the same sort of lawn I do and don’t mind wildflowers!). During the heat of summer, the non-native, cool season grasses become dormant, but again start to grow in late summer when rains resume. 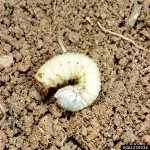 As has happened some other years, a couple of areas seem to resist this green-up, and rather stay brown and dormant- or dead, actually. Then signs of digging suddenly appear, usually a multitude of small, funnel-shaped holes a couple of inches deep. I never seen any animals digging, and I know my dog isn’t the cause as she digs holes the size of bowling balls. Then I realize that the grass is being eaten from below by “grubs”, and the holes are from a skunk trying to eat the “grubs” from above.

The “grubs” or “white grubs” are actually the larvae of beetles in the scarab beetle group, which around here includes May beetles or June 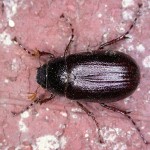 bugs, European chafers, and, if you’re unlucky, Japanese beetles. All of these species spend much of the year in larval form moving through the soil eating the roots of plants. They apparently find the roots of turf grasses particularly tasty, and although they are always present sometimes are dense enough in number to damage patches of lawn. This is upsetting enough to those who really enjoy a lush green yard, but the damage the skunks do on top of that of the grubs makes the situation all the worse.

I would often wonder at the skunks ability to find the grubs, but I’m sure they’re just as good at spotting a brown patch on a lawn as we are. Their eyesight, which is apparently not that acute, would not help them in actually locating the insects they relish- they rely on very well-developed senses of smell and hearing for that. And although they will take advantage of a variety of food sources, insects in various forms are perhaps their most important food, which may be to our benefit also.

The skunk situation is interesting, as I wonder if our preference for lawns dominated by non-native grasses that grubs like rather than a diverse natural groundcover of hundreds of species of plants has actually helped the beetles flourish, along with our introduction of the non-native chafers and Japanese beetles. Skunks have hunted beetle larvae forever, and likewise our alteration of the ecosystem to favor beetles ultimately helps the skunks as well. At least until we become fed up with the whole situation and trap or otherwise remove the skunks from our personal landscapes. Or poison the beetles and countless other soil organisms in the process. Or, and I prefer this approach, let the skunks finish the job, reduce the beetle population, and move on. Turf grasses spread by their roots, and the surrounding grass will re-colonize the damaged areas this fall and next spring. For a while at least you’ll have less lawn to mow.

Next year you can dig up foot-square areas of sod 4-6 inches deep and count the larvae you find. If you find just a few grubs it’s not a problem, but 10 or more per sample means you might consider some type of control as this will likely result in a lot of lawn and skunk damage later on. So who’s to “blame” for this lawn problem? Skunks are there because the larvae are, and larvae are there because people created lawns and/or introduced them to our neighborhoods. As usual in nature, many parts are intertwined, and it’s important to understand all of them.